Why AI might be the future of GPU mining 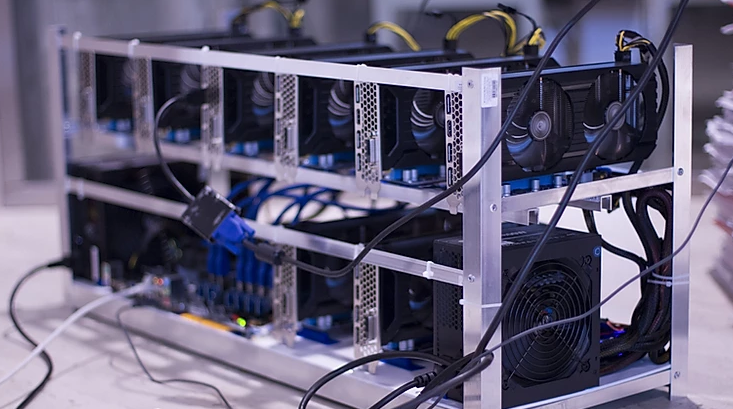 The legend says there were times where getting into crypto mining was a piece of cake. Meaning you didn’t have to sell your old Toyota for a dedicated computing rig. Just download the client on your laptop, plug yourself to the network and it’s on.

Satoshi Nakamoto liked this happy equilibrium and wanted it to last as long as possible.

Back then, before the era of GPUs and the subsequent appearance of ASICs, squeezing a megahash or so from your CPU would easily get you in the mix for a block reward of 50 BTC. (nowadays >$350,000)

But these days are long gone — crypto mining has turned into a full-fledged industry. What was once an obscure hobby for the tech nerds, is now a cut-throat business, where staying afloat requires regular price-heavy investments.

However, the purpose of this article is not to judge whether the path Proof of Work mining has gone down is right or wrong. Instead, we will try to explore some plausible alternatives in the face of Artificial Intelligence training and their exciting implications.

But first, let’s draw a picture of what the crypto mining space currently looks like. If you were a newbie miner, you’d quickly realize a few things.

The fierce competition makes it harder for each miner

As you know, the mineable blockchains have their mechanism of auto adjustment, according to the competition. The more miners on the blockchain, the harder the mining becomes. Literally. This makes it tough for everyone, but the ones who suffer most are the small miners. The reason is the hardware that once was enough to get you profits, has now become obsolete, and if you can’t keep up with upgrading it, you’re bound to be driven out of the crypto mining game.

Bitmain is one of the famous crypto mining manufacturers with their Antminer ASIC series. They release new models a few times a year. The famous S9 came out in the summer of 2017 at a price of $3000 with its 14 TH/s. It’s still being used by a lot of miners, although they released only a few months later the Antminer S11, with improved productivity of 20.5 TH/s. And their latest models T17 and S17 come at the prices of $952 and $1322 for 40TH/s and 53 TH/s respectively.

So, if you were to purchase an S11 in a little more than 1 year ago, you would have faced new competitors with twice the hash rate coming even before you’re able to pay out your older rig.

Satoshi foresaw all this even before the first bitcoin was mined

“At first, most users would run network nodes, but as the network grows beyond a certain point, it would be left more and more to specialists with server farms of specialized hardware.”

There’s the price of the token, too. Obviously, as a miner, you rely heavily on pricing. And crypto happens to be one of the most volatile asset classes. For example, 2018 was notoriously bearish for the whole space. The Ether suffered a dreadful 94% drop from its All-Time High levels at $1450 all the way down to $84 in December. And this wasn’t even the worse example. Lots of PoW blockchains just couldn’t recover. Teams were dismantled and it led to lots of miners ending up with bags full of coins with no liquidity.

Every coin has two sides, of course. What happens in a bull market? Unfortunately, it’s only a short-lived celebration. As valuation increases, the possible reward draws more interest from new miners and increase difficulty, bringing us to the above point again.

Mining doesn’t scale very well. In order to increase profits, you need to invest in more and newer machines. Sometimes you have to invest to just stay above the break-even. Your best bet is your personal expansion rate beats the competition increase rate, a strategy that often turns out to be too expensive for ordinary “hobby” miners.

Proof of Work vs Proof of Stake

Proof of Work (PoW) became popular when Bitcoin started getting traction, although the very concept of validation through computational labor had been first conceived as early as the 1990s. A cornerstone in the cryptocurrency movement, it was considered necessary for network safety, as it provided a robust mechanism to deter a possible 51% attack.

Then people invented another approach — Proof of Stake (PoS). It revolves around the ‘skin in the game’ idea — a validating node would stake their cryptocurrency in exchange for the block reward. If the node tries something funny, he risks losing all their crypto, hence there is no incentive to act maliciously. A radically different mechanism, in PoS there’s no need for heavy computations, meaning mining becomes redundant.

Which one is best? There is no definitive answer, as both consensus algorithms come with their pros and cons. However, it’s worth noting that the second-largest blockchain project, Ethereum, is exploring this possibility and have announced plans to switch from PoW to PoS with their upcoming major upgrade, dubbed Casper. With Ethereum’s current hash rate of 176TH/s, it’s safe to say that a lot of miners would be forced to look for alternatives.

So what do we do if we are miners?

In December 2018, the crypto bear market reached a point where the number of Bitcoin miners have stopped growing. It wasn’t much better for other mineable blockchains, either. Negative ROI forced more than 600 000 miners to shut down and led to mining giants GigaWatt declaring bankruptcy.

The diminishing yellow chunk being the profits of Bitcoin miners during the first three quarters of 2018.

And while in 2019, things took an upturn for the king of cryptocurrencies (and PoW blockchains), this just comes to show that no miner is safe from the effects of a bear market.

Furthermore, competition is great for consumers (and safety). Not that cool when you are the one who competes in a sea of sharks.

But as tough as it looks for miners lately, an alternative might come from a fledgling niche with huge potential.

It’s all the buzz lately. But why now?

The concept of simulating the human brain with machines started getting traction in the 1950s. Not long after, computer scientists thought: ‘what if we make machines learn by themselves?’ Thus, the Machine Learning branch was born.

Then, after several ups and downs over the next decades, Machine Learning was reinvigorated by progress in its own subfield — Deep Learning. The approach was to make artificial neural networks, with multiple hidden layers between the input and output tiers. The method drew inspiration from the way our human brains process information.

Enough with the brief history lesson, let’s catch up to where AI is now.

You might have heard of AutoML — short for Automated Machine Learning, this technology is about AI learning how to design better AI.

In 2017, the interest toward AutoML spiked following a breakthrough reveal from Google. The report said that their algorithm has designed neural nets architectures on par with their best data science experts. Some have interpreted the news as humans no longer being needed in the process of AI creation… and that wouldn’t be too far from the truth.

AutoML is based on and very closely related to NAS — Neural Architecture Search. If you’re wondering, here’s an easy how-it-works explanation, credits to George Seif.

In simple terms: have an algorithm grab different blocks and put those blocks together to make a network. Train and test out that network. Based on your results, adjust the blocks you used to make the network and how you put them together!

What has this to do with mining and your electricity devouring monster?

As exciting the AutoML and NAS findings are, they come with a caveat — computational power. Going back to Google’s example, their NASNet paper explained that it took 450 GPUs and more than 3 days of training to find that one awesome neural net architecture!

It makes sense — an AutoML algorithm is basically testing different approaches in neural net architecture to see what works best with the current problem. And it keeps running this building-and-testing-neural-nets process until it finds a solution.

The field has been continuously evolving in the last couple of years. Researches have worked hard to make NAS more efficient. At the same time, more than a few great AutoML libraries have been developed, some of them being open-source, too.

Still, computational power is one of the two limiting factors in the development of AI,

the other being data to be trained on. This is one of the main reasons why tech giants like Google, Facebook, Amazon are leaders in AI. They own a myriad of powerful servers and their business models are providing them unlimited access to dynamic data to train and experiment on.

In 2018, Google started selling its Cloud AutoML service. It’s great for the non-experts, as it allows them to tap into state-of-the-art AI technology, as long as they feed it enough data. But it comes at a steep price — $20 per hour of usage.

This is the result of centralized computing resources

— Google has it all, hence their power to set pricing as they like.

But what if the supply of resources required for this cutting-edge automation in AI development could be distributed across a number of small players, instead of only one giant? Blockchain looks like an obvious answer, as it enables decentralized networks to work in a scalable way, without sacrificing security at all.

One example is the Golem network. Currently, with a live beta, Golem uses blockchain to create a decentralized marketplace for computational power. Nowadays, its utility is centered mostly on rendering, while the team is aspiring to a machine learning use case in the future.

ScyNet is another project that could develop a decentralized marketplace for computational power. Described as an open network for distributed Machine Learning, ScyNet is focused solely on utilizing that power for AI creation. Its infrastructure is based on NAS algorithms which makes ScyNet the first AI network, which actually provides a means to create the AI. This is different from projects like SingularityNET, which aim for a decentralized AI network but leave the AI creation process entirely to data scientists and expert engineers.

In essence, the ScyNet bet is that a free decentralized marketplace would enable fair pricing, driven by the natural equilibrium of supply and demand for computational power.

ScyNet.ai is still in its infancy, but it’s set up to become a decentralized AI marketplace of the future. To do so, it uses a blockchain protocol to create an ecosystem of interconnected mutually beneficial nodes. The developing platform will run on a utility token that incentivizes nodes to participate in an open economy of data, computational power, and AI solutions. The blockchain protocol also ensures validation of performance for the AI agents, meaning external clients would know that what they pay for is what they get.

Last but not least, ScyNet is open-source and anyone could join for free. By providing distributed means for Automated Machine Learning, it opens the barrier for a lot of people that otherwise could not tap into the latest AI tech. The applications of such a network could be countless — from price prediction for crypto markets to medical imaging for diagnosis, natural language processing, and even self-driving cars.

Mining crypto has been a way to make money, while also supporting a cause — whether that is decentralized and secure hard money, or building a platform for digital kitten games. But if you want to stay ahead of the curve, embrace the learning mentality and explore the current state of Artificial Intelligence and Deep Learning. Supporting an open democratic AI cause, which has virtually unlimited use cases, is on its way to becoming a feasible business model, too.

So don’t throw out your rig just yet. The future of AI is bright and your machine could become part of it.